This article summarizes best practices for Ignite native persistence tuning. If you are using an external (3rd party) storage for persistence needs, please refer to performance guides from the 3rd party vendor.

The page size of the storage device such as SSD is usually noted in the device specification. If the manufacturer does not disclose this information, try to run SSD benchmarks to figure out the number. Many manufacturers have to adapt their drivers for 4 KB random-write workloads because a variety of standard benchmarks use 4 KB by default. This white paper from Intel confirms that 4 KB should be enough.

Once you pick the most optimal page size, apply it in your cluster configuration:

Consider using separate drives for data files and Write-Ahead-Logging (WAL). Ignite actively writes to both the data and WAL files.

The example below shows how to configure separate paths for the data storage, WAL, and WAL archive:

The default WAL segment size (64 MB) may be inefficient in high load scenarios because it causes WAL to switch between segments too frequently and switching/rotation is a costly operation. Setting the segment size to a higher value (up to 2 GB) may help reduce the number of switching operations. However, the tradeoff is that this will increase the overall volume of the write-ahead log.

Consider other WAL modes as alternatives to the default mode. Each mode provides different degrees of reliability in case of node failure and that degree is inversely proportional to speed, i.e. the more reliable the WAL mode, the slower it is. Therefore, if your use case does not require high reliability, you can switch to a less reliable mode.

There are situations where disabling the WAL can help improve performance.

Ignite periodically starts the checkpointing process that syncs dirty pages from memory to disk. A dirty page is a page that was updated in RAM but was not written to a respective partition file (an update was just appended to the WAL). This process happens in the background without affecting the application’s logic. 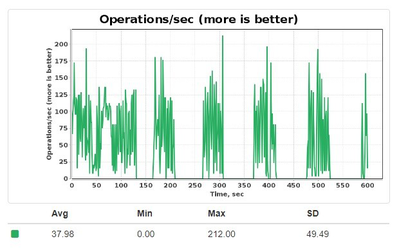 The same situation occurs if the dirty pages threshold is reached again while the checkpointing is in progress. This will force Ignite to schedule one more checkpointing execution and to halt all the update operations until the first checkpointing cycle is over.

Both situations usually arise when either a disk device is slow or the update rate is too intensive. To mitigate and prevent these performance drops, consider enabling the pages write throttling algorithm. The algorithm brings the performance of update operations down to the speed of the disk device whenever the checkpointing buffer fills in too fast or the percentage of dirty pages soar rapidly.

The example below shows how to enable write throttling:

The default buffer size is calculated as a function of the data region size:

The default buffer size can be suboptimal for write-intensive workloads because the page write throttling algorithm will slow down your writes whenever the size reaches the critical mark. To keep write performance at the desired pace while the checkpointing is in progress, consider increasing DataRegionConfiguration.checkpointPageBufferSize and enabling write throttling to prevent performance​ drops:

In the example above, the checkpointing buffer size of the default region is set to 1 GB.

Usually, whenever an application reads data from disk, the OS gets the data and puts it in a file buffer cache first. Similarly, for every write operation, the OS first writes the data in the cache and transfers it to disk later. To eliminate this process, you can enable Direct I/O in which case the data is read and written directly from/to the disk, bypassing the file buffer cache.

The Direct I/O module in Ignite is used to speed up the checkpointing process, which writes dirty pages from RAM to disk. Consider using the Direct I/O plugin for write-intensive workloads.

You can use the IGNITE_DIRECT_IO_ENABLED system property to enable or disable the plugin at runtime.

Get more details from the Ignite Direct I/O Wiki section.

Note that the performance of Ignite Native Persistence may drop after several hours of intensive write load due to the nature of how SSDs are designed and operate. Consider buying fast production-level SSDs to keep the performance high or switch to non-volatile memory devices like Intel Optane Persistent Memory.

Consider buying SSDs with higher over-provisioning rates and make sure the manufacturer provides the tools to adjust it.