Ignite’s default TCP/IP Discovery organizes cluster nodes into a ring topology that has advantages and disadvantages. For instance, on topologies with hundreds of cluster nodes, it can take many seconds for a system message to traverse through all the nodes. As a result, the basic processing of events such as joining of new nodes or detecting the failed ones can take a while, affecting the overall cluster responsiveness and performance.

ZooKeeper Discovery is designed for massive deployments that need to preserve ease of scalability and linear performance. However, using both Ignite and ZooKeeper requires configuring and managing two distributed systems, which can be challenging. Therefore, we recommend that you use ZooKeeper Discovery only if you plan to scale to 100s or 1000s nodes. Otherwise, it is best to use TCP/IP Discovery.

ZooKeeper Discovery uses ZooKeeper as a single point of synchronization and to organize the cluster into a star-shaped topology where a ZooKeeper cluster sits in the center and the Ignite nodes exchange discovery events through it. 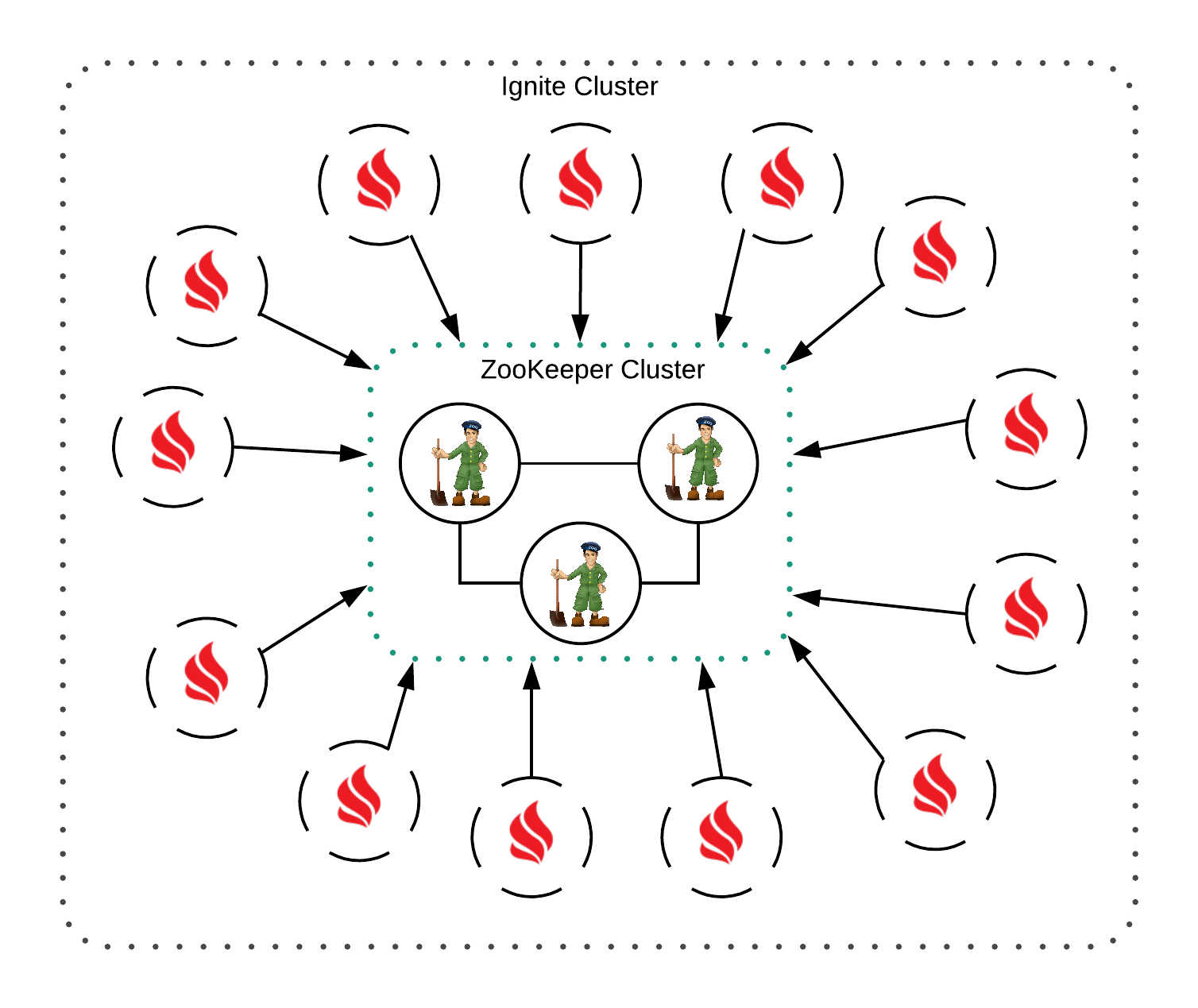 To enable ZooKeeper Discovery, you need to configure ZookeeperDiscoverySpi in a way similar to this:

In case of network partitioning, some of ​the nodes cannot communicate to each other because they are located in separated network segments, which may lead to failure to process user requests or inconsistent data modification.

Whenever a node discovers that it cannot connect to some of the other nodes in the cluster, it initiates a communication failure resolution process by publishing special requests to the ZooKeeper cluster. When the process is started, all nodes try to connect to each other and send the results of the connection attempts to the node that coordinates the process (the coordinator node). Based on this information, the coordinator node creates a connectivity graph that represents the network situation in the cluster. Further actions depend on the type of network segmentation. The following sections discuss possible scenarios.

If the cluster is split into several independent components, each component (being a cluster) may think of itself as a master cluster and continue to process user requests, resulting in data inconsistency. To avoid this, only the component with the largest number of nodes is kept alive; and the nodes from the other components are brought down. 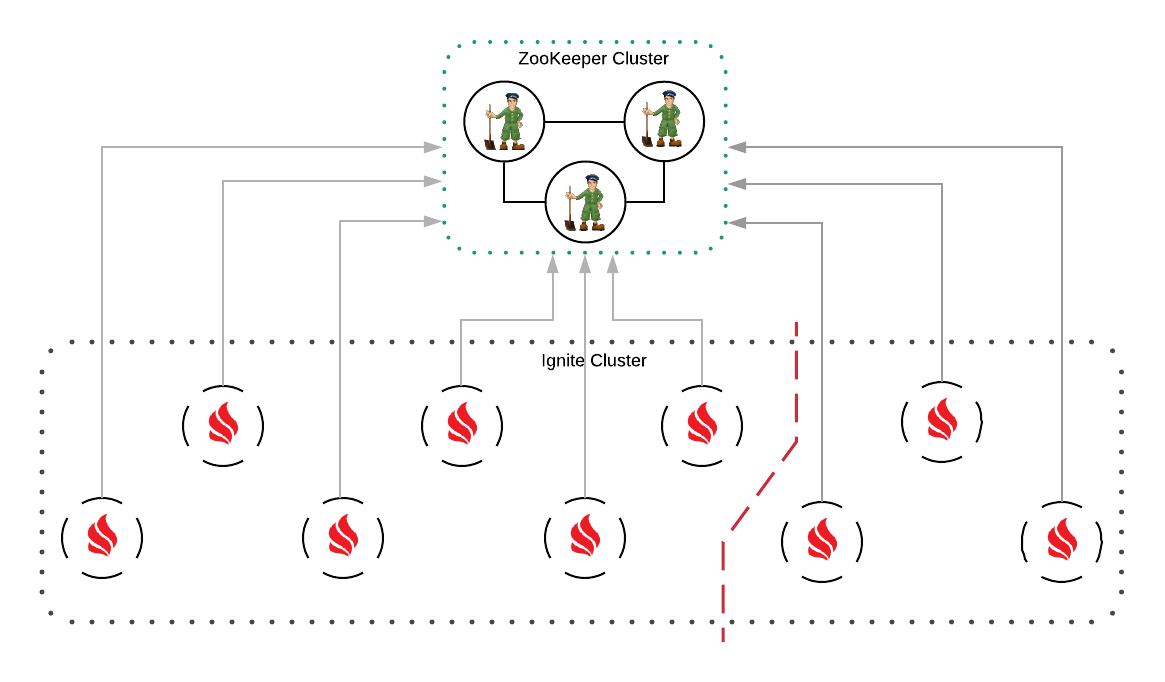 The image above shows a case where the cluster network is split into 2 segments. The nodes from the smaller cluster (right-hand segment) are terminated. 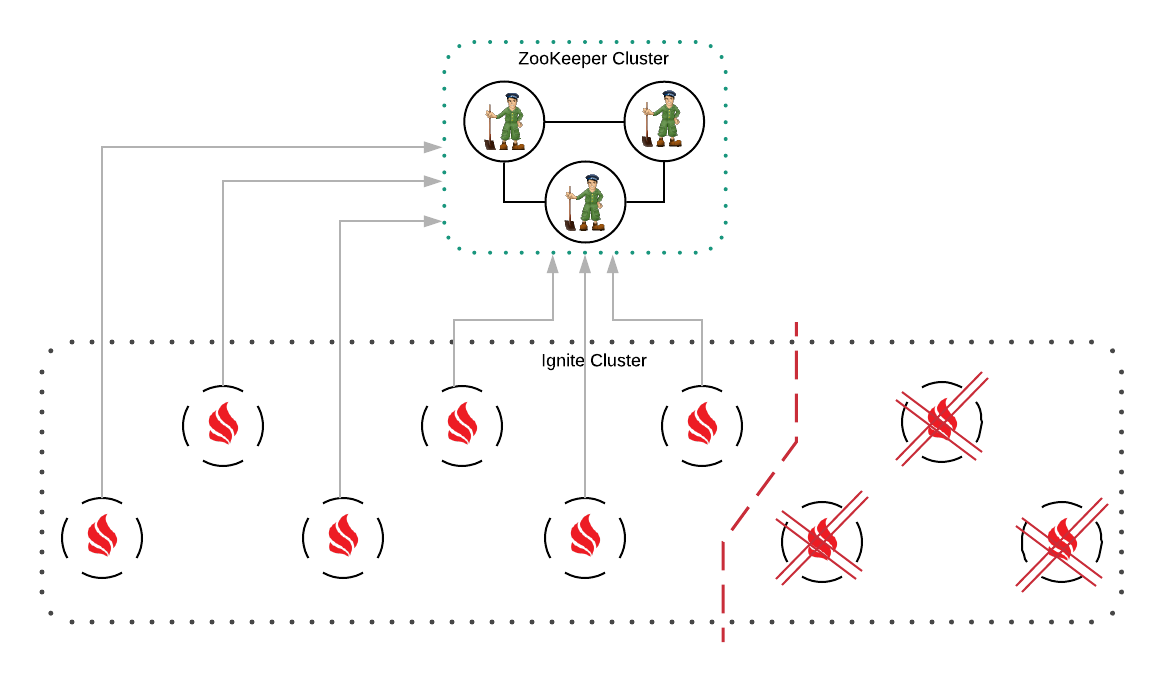 When there are multiple largest components, the one that has the largest number of clients is kept alive, and the others are shut down.

Several links between nodes are missing 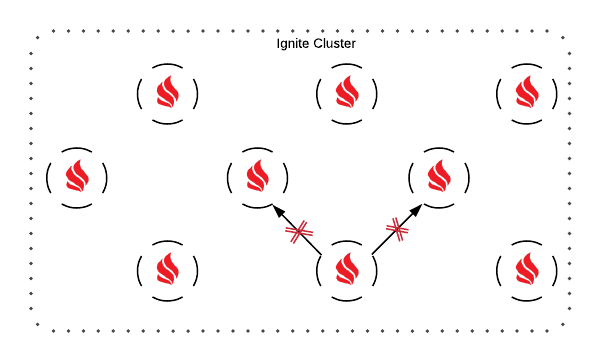 In this case, the task is to find the largest component in which every node can connect to every other node, which, in the general case, is a difficult problem and cannot be solved in an acceptable amount of time. The coordinator node uses a heuristic algorithm to find the best approximate solution. The nodes that are left out of the solution are shut down. 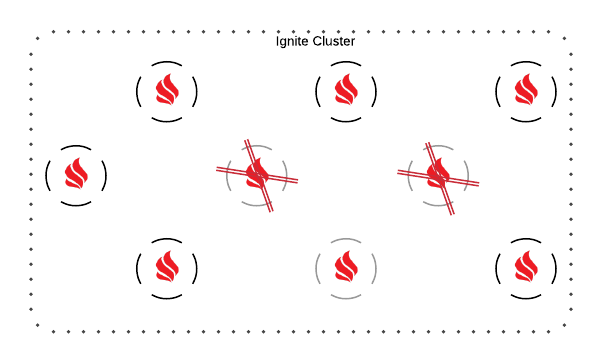 In large-scale deployments where the ZooKeeper cluster can span multiple data centers and geographically diverse locations, it can split into multiple segments due to network segmentation. If this occurs, ZooKeeper checks if there is a segment that contains more than a half of all ZooKeeper nodes (ZooKeeper requires this many nodes to continue its operation), and, if found, this segment takes over managing the Ignite cluster, while other segments are shut down. If there is no such segment, ZooKeeper shuts down all its nodes.

The following image is an example of network segmentation that splits both the Ignite cluster and ZooKeeper cluster into two segments. This may happen if your clusters are deployed in two data centers. In this case, the ZooKeeper node located in Data Center B shuts itself down. The Ignite nodes located in Data Center B are not able to connect to the remaining ZooKeeper nodes and shut themselves down as well. 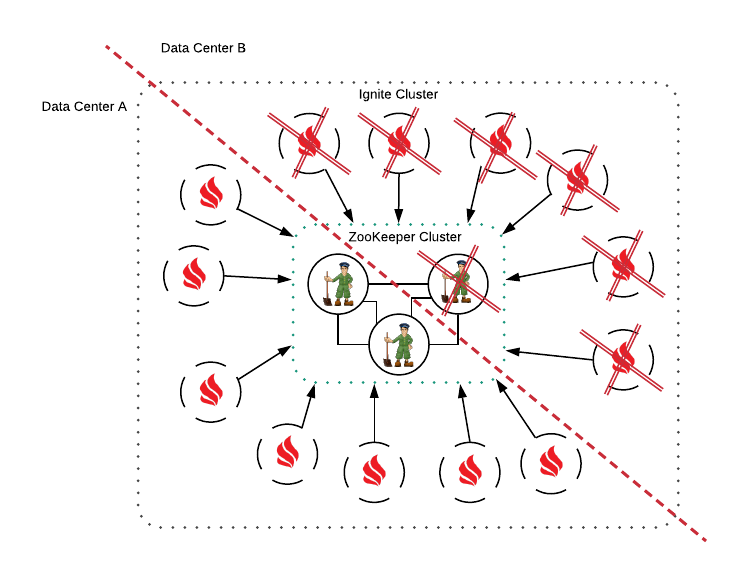 Changing a ring-shaped topology to the star-shaped one affects the way custom discovery events are handled by the Discovery SPI component. Since the ring topology is linear, it means that each discovery message is processed by nodes sequentially.

When using ZooKeeper Discovery, you need to make sure that the configuration parameters of the ZooKeeper cluster and Ignite cluster match each other.