Binary Logistic Regression is a special type of regression where a binary response variable is related to a set of explanatory variables, which can be discrete and/or continuous. The important point here to note is that in linear regression, the expected values of the response variable are modeled based on a combination of values taken by the predictors. In logistic regression Probability or Odds of the response taking a particular value is modeled based on the combination of values taken by the predictors. In the Apache Ignite ML module it is implemented via LogisticRegressionModel that solves the binary classification problem. It is a linear method with the loss function in the formulation given by the logistic loss:

For binary classification problems, the algorithm outputs a binary logistic regression model. Given a new data point, denoted by x, the model makes predictions by applying the logistic function: 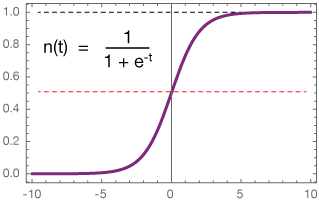 By default, if f(wTx)>0.5 or \mathrm{f}(\wv^T x) > 0.5 (Tex formula), the outcome is positive, or negative otherwise. However, unlike linear SVMs, the raw output of the logistic regression model f(z) has a probabilistic interpretation (i.e., the probability that it is positive).

The model is represented by the class LogisticRegressionModel and keeps the weight vector. It enables a prediction to be made for a given vector of features, in the following way:

Trainer of the binary logistic regression model builds a MLP 1-level trainer under the hood.

Set up the trainer:

To see how LogRegressionMultiClassModel can be used in practice, try this example, available on GitHub and delivered with every Apache Ignite distribution.